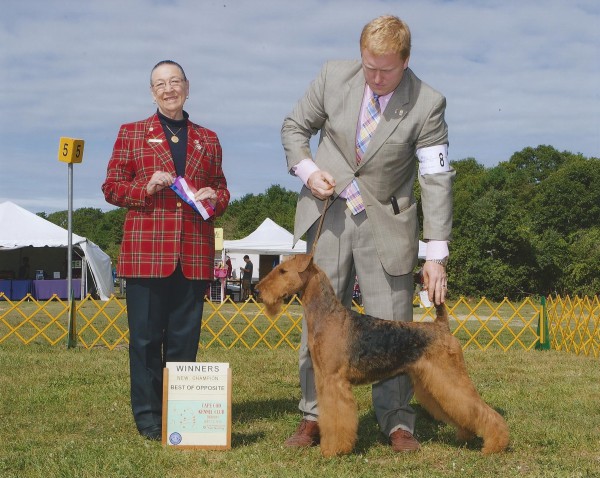 Whitney is a Striker daughter. Striker is an American and Canadian Champion and he is also a Canadian Best In Show winner. His registered name is CH Penaire Star Struck at Woodcrest. He attained his Canadian Championship in a single weekend and topped it off with a Best in Show win over the Number 1 All Breed Irish Setter that is handled by Top Canadian PDH Will Alexander. As a result he finished 2005 as the number 3 Airedale in Canada. He has multiple Best of Breed and Group Placements in the US and in Canada. Striker finished his US Championship with big wins including Winner’s Dog at the New England Airedale Terrier Specialty and Best Of Breed at the 2005 Greenwich Dog Show supported entry by the Airedale Terrier Club of Metro New York. Striker is featured on the Airedale Terrier Club of America’s Breeders Airedale Showcase at http://www.airedale.org/. Striker has an outstanding pedigree, great hard coat, excellent temperament, and fantastic movement that sets him apart from other Airedales currently in the show ring.

Striker is a Dallas son. Dallas is a Multiple Best in Show winner and American/Canadian Champion. Dallas was owner handled to 4 Best in Shows, 11 Group First placements, and multiple Group placements. Even as a veteran Dallas takes home big wins including Best Veteran and Award of Merit at Montgomery County Kennel Club. 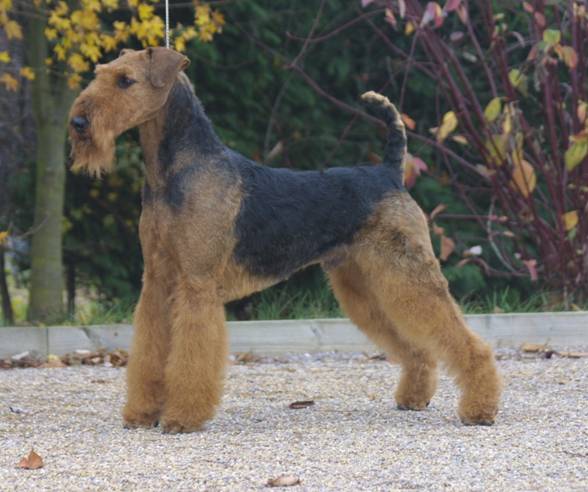 Click on the image to see it full size.

Click on the image to see it full size.